In the summer of 2019-2020, Australia suffered its worst bushfire season on record, with approximately 25.5 million acres burned and an estimated 1 billion wild animal deaths. I began studying abroad at the University of New South Wales when the bushfires were at their peak, taking their January summer course in Human Computer Interaction (COMP3511). For our final project, my team and I developed a prototype for a digital product focused around the theme of bushfire safety.

To better empathize with the users we were targeting, we drafted personas and context scenarios of potential uses of our app. 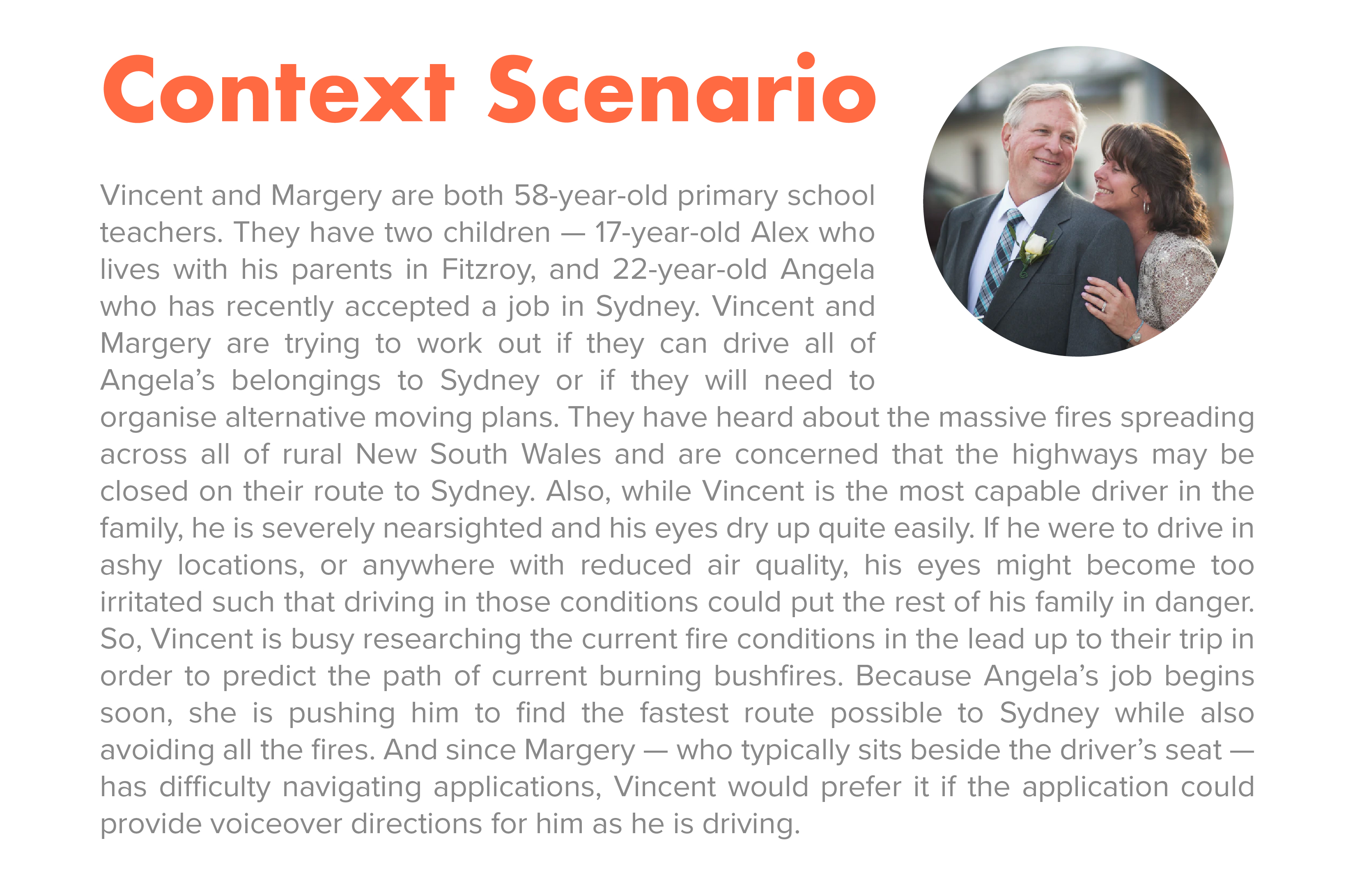 My team and I interviewed 9 potential users aged 20 to 40. When it came to bushfire concerns, interviewees were primarily concerned by potential property damage, road and area closures, air quality reductions, and climate/weather changes. While some pinpointed fire locations through applications such as Rural Fire Safety and Australian Fires, and monitored air quality on any given day using AirVisual, they still indicated a desire for a product which could concurrently provide both services.
‍
Most interviewees used Apple or Google Maps for route planning. They indicated an affinity towards being able to look up street addresses, having real-time location updates, having turn-by-turn navigation, and having integrated bus transit times.
‍
While we did try to interview for accessibility, none of our interviewees listed major accessibility challenges with any devices, although some interviewees had low vision or colorblindness.

As the team’s UI Designer, I created paper prototypes to address our survey findings. Using Adobe Illustrator, I designed 10 screens and 6 interactive elements to print out for user testing. We then conducted user tests with 8 participants aged 20 to 36.

Once our testing was completed, my team and I compiled an issues table of our feedback — labeling whether it was positive or negative, its type of feedback (Usability Goals, Design Heuristics, Design Goals, or UX Goals), and its level of severity.

During our testing phase, we discovered several problems with our design:

1. Some users conjointly used buses and trains to arrive at a destination. This meant it was unrealistic for us to have separated these into two categories in our medium-fidelity design.
2. The navigation for the “Accommodations” tab was confusing, as it was unclear which content was clickable.
3. The warning icons next to each route did not properly signify what they meant. 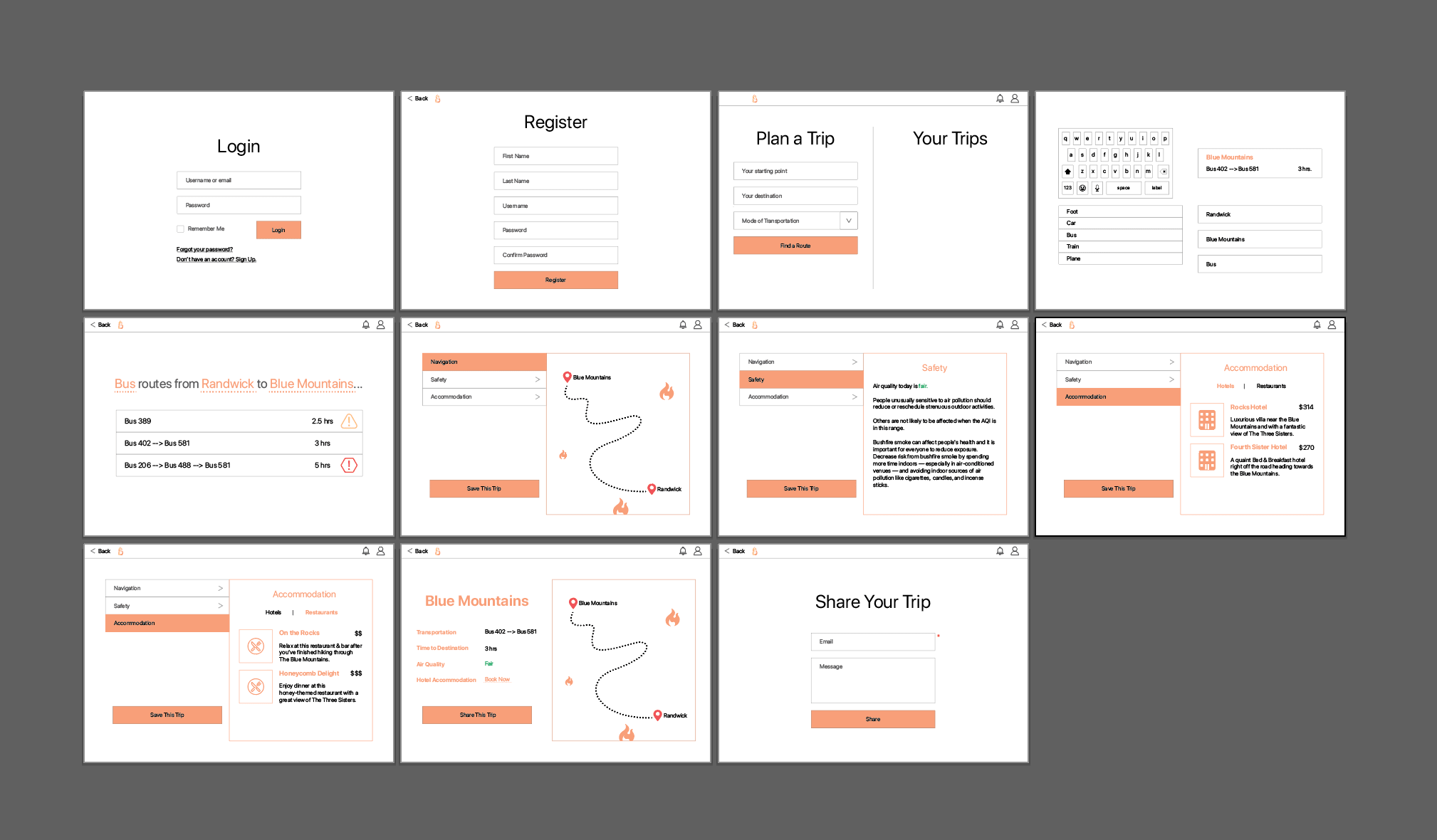 Medium fidelity mockup made in Illustrator and printed out for testing. 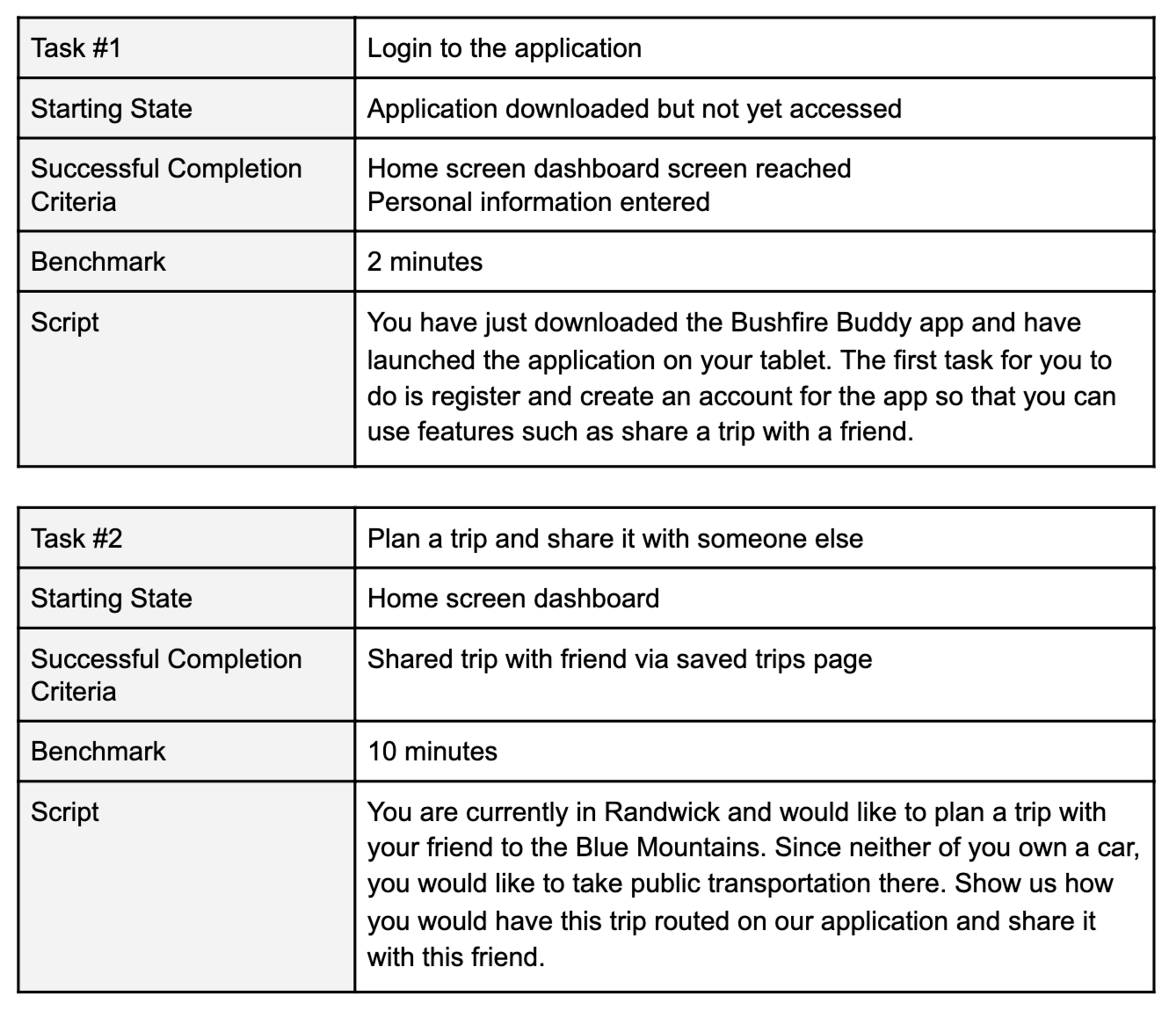 Tasks we asked our test users to perform, with the goal of completion time to be around the listed benchmark.

While developing a high-fidelity prototype was neither required nor expected for this project, I chose to still design one as a personal challenge. So after our team completed the issues table, I began analyzing it for changes to implement into a high-fi prototype.

Solutions to user issues from the previous iteration included:

Because I was simultaneously doing a separate design challenge for Google while developing this prototype, I gave myself a deadline of only 4 days to illustrate, brand, and design the UI for Bushfire Buddy.

Check out my Google design challenge!

This project taught me how much UX research factors into the design process for UI, and I now feel that neither UX nor UI can exist without the other.

Additionally, creating two high-fi prototypes with accompanying presentations within the span of one week taught me time management, and how to properly prioritize each benchmark goal to get both products completed at a high-quality level.

If I were to continue developing this application, I would focus on testing my high-fidelity prototype with a more diverse set of users — especially those in an older age bracket. Although this application is supposed to aid families, most of our user interviews were conducted with college students. As such, while the graphics and minimalist aesthetic might appeal to university students and be easily usable for them, the same might not be the case for users of an older age group.